Blog - Latest News
You are here: Home / Blog / Too busy to cook? Try a slow cooker! 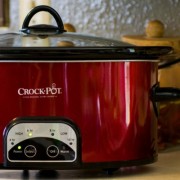 Too much fresh local food and not enough time to cook it? Try using a slow cooker! It gives you control and convenience – safely. Throw in the ingredients, set the heat and cooking time, then walk away and forget about it for hours… without burning down the house.

When you come back at the end of a busy day or after a good night’s sleep, a complete meal is waiting for you. Done right, it’s like the veggie fairies came in and worked their magic while you weren’t looking.

How to pick a good slow cooker

Depending on the recipe, you can fill a slow cooker and hit start in about five minutes, just enough time to listen to this fun interview with Top Chef judge Hugh Acheson while you chop and toss in fresh local ingredients. He’s got a new slow cooker cookbook and a some great advice.

Slow cookers are relatively inexpensive, and paying more doesn’t necessarily get you a better piece of gear. All you need it to do is cook slowly and steadily and keep the food warm when it’s done. Most new slow cookers these days are designed to automatically switch to a warm setting after they’re done cooking, which will keep the food at a safe temperature until you’re ready to eat.

When you’re picking one out, the most important part to consider is the insert pot. A heavy, ceramic insert is best for even heat distribution. Other than that, just pick one with a control panel that’s simple and easy to use.

While a lot of bells and whistles aren’t needed, a programmable option may be a useful convenience. It lets your meal start cooking at a predetermined start time for a predetermined length of time.

Planning ahead makes it even more convenient

If you want to start your slow cooker first thing in the morning and your mornings are pretty crazy, just start the night before.

Chop up the fresh local ingredients, measure out the dry ingredients, and prepare any sauce, putting each group of ingredients in its own container. Don’t refrigerate them in the slow cooker’s insert pot. If the insert is chilled, it will take too long to heat up. That will lengthen cooking time, reduce the cooking temperature, and could make your food unsafe.

So in the morning, add ingredients to the cooker according to the recipe. Reheat any sauce to a simmer before you add it to the mix.

When you set the heat level, here’s a general rule of thumb: Cooking on the low setting (170 degrees for most models) takes about twice as long as cooking on high (usually 280 degrees).

If you won’t be home close to the end of the cooking time, this is when it’s good to have a slow cooker that will automatically switch to the warm setting when the cooking is done.

Slow cookers are admittedly a bit glamour-challenged, mostly because they’ve got a reputation for producing pots of bland mush. But it doesn’t have to be that way. You don’t need help from a Top Chef to make sure your slow cooker meals are satisfyingly delicious.

1. Use fresh ingredients, never frozen. If you want to include some of your fresh local produce that you preserved in the freezer, let it defrost before adding it. That way it won’t interfere with the slow cooker’s ability to get all the ingredients hot enough to kill any harmful bacteria that might thrive if the temp is too low.

2. If you’re cooking meat, choose the right cut. Fatty, tougher meats like chuck roasts, short ribs, pork shoulders, and lamb shanks will melt in your mouth after all those hours in the moist, low heat of a slow cooker. Leaner cuts like tenderloin tend to dry out. Same with chicken — dark meat thighs and drumsticks will remain juicier than white meat breasts.

3. If you have a little extra time, brown meat before you add it to the cooker. For a thicker sauce, dredge it in flour before browning. Then use some of the liquid called for in the recipe to scrape up and pour all the savory, brown, caramelized bits from the pan into the cooker. You’ll get a richer flavor that you can’t get from slow-cooking alone.

4. One more bit of meat advice: Trim the fat and skin the chicken to avoid an oily, greasy cooking liquid. By limiting the excess fat, you’ll wind up with delectably silky sauces and gravies.

5. For even cooking, cut everything into uniform-size pieces. Place firm, slow-cooking root vegetables like potatoes and carrots at the bottom and pile more tender veggies and any meat on top.

6. Definitely use spices! But watch the wine. The slow cooker is sealed so the alcohol can’t escape and evaporate like it would from a normal pot. A splash goes a long way.

7. Don’t overfill. The insert pot should be only one-half to two-thirds full, or whatever your cooker’s owner’s manual recommends. It’s okay to slow cook roasts and whole chickens, but make sure the lid still fits snugly.

8. Never lift the lid while it’s cooking — at least not until 30 to 45 minutes before it switches to low to check for doneness. Each peek lets heat escape and adds 15 minutes to the cooking time. Usually there’s no need to stir, either.

9. Add dairy last. Sour cream, milk, and yogurt tend to break down in the slow cooker, so stir them in during the last 15 minutes of cooking.

10. At the end of simmering, a sprinkle of fresh herbs or squeeze of lemon juice brightens flavors and cuts through all those rich slow cooker flavors. You can also finish off with hot sauce, citrus zest, grated Parmesan, good-quality olive oil, or even sauteed garlic.

Cooking from scratch with fresh local food ends in a meal that’s full of more flavor and nutrients than you get from processed foods out a box, bag, or can. And with a slow cooker, it’s almost as easy. Thanks to slow cookers, you can be busy and still enjoy healthy eating!

Since 2011, Seasonal Roots’ online farmers market has connected Virginia families with local family farmers who use sustainable, humane practices. Our veggie fairies – mostly moms who believe in living better through scrumptious, healthy eating, being kind to animals, protecting the environment, and spreading joy – home-deliver freshly harvested produce, pastured eggs, grassfed dairy and meat, plus artisan fare. We empower our members to eat better and live better with more nutritious, flavorful food that’s good for us and good for the planet. More info at seasonalroots.com.

Too busy to cook? Try a slow cooker
Scroll to top