Blog - Latest News
You are here: Home / Blog / Here’s why grassfed beef is worth the money 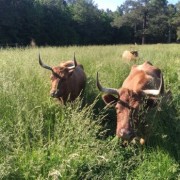 All our family farmers are transparent about the way they farm. They do it the old fashioned way: slow and natural.

That’s how Earl, his wife Robin, and son Jesse raise their animals (cows, pigs, chickens, and more) at Harmony Hill Farm in Scottsville, Va. We talked about it with Earl, and we’ve got the whole conversation below, plus info how to cook grassfed beef without ruining it!

The motto of Earl and his family is: “Farming in harmony with nature.” It’s not the cheapest way to farm. But here’s why it’s worth paying a little extra money to benefit from what they have to offer.

Before the days of industrial corporate farming, the typical American family spent 30% of their income on food… about the same as what they spent (and still spend) on housing.

Nowadays, thanks to industrial agriculture, most Americans spend less than 10% of their family budget on food. But it’s true what they say: You get what you pay for. Treating plants and animals like widgets on an assembly line has made them cheaper in every sense of the word. Today’s food has fewer nutrients, less natural flavor, and more unhealthy stuff like pesticides, antibiotics, hormones, and bad fats.

To minimize cost while maximizing profit, industrial agriculture harvests produce before it’s ripe from soil full of chemicals, then ships it long distances. Industrial ag crams animals into confined spaces, stuffing them with unnatural feeds, antibiotics, and hormones to fatten them fast during their short, often miserable lives. The result is food that’s much less nutritious and flavorful than what your grandparents ate, and worse for the environment.

To get the food our bodies were meant to eat, you have to turn back the clock to the old ways of doing things. You have to take your time and grow your produce in soil that’s naturally rich and fertile, not chemically enhanced. And you have to leave your produce there until it has absorbed all the nutrients and flavor it was meant to absorb from the earth and the sun.

You have to raise your animals the way nature intended — out in the pastures and woodlands and sunshine, eating what they were meant to eat. For cows, that means grass. Grassfed beef contains more healthy things like vitamins, omega-3 fatty acids, and cancer-fighting fats.

Yes, it costs more to make food this way. But better health is worth it. The better flavor that comes with it is icing on the cake.

As a farmer, it’s not easy to go the unconventional all-natural route. The American industrial food system is designed to support conventional farmers. We asked Earl about it.

How long have you been farming?

We’ve been farming full-time here in Fluvanna County for two and a half years. Before that I was a landscape contractor for 30 years in Hanover County. We’d gotten a few cows and hens and broilers, raising them on the side as hobby. But our hearts became more involved with that than the landscaping. So we left the landscaping business, found a farm, and moved up here and started farming full-time.

That’s a big change! Any regrets?

None so far. We moved away from our family and friends, so we don’t have that everyday interaction anymore. We thought it would be more of an emotional strain. But it really hasn’t been. It was time for a new season in our life and where the Lord was leading. It doesn’t mean it hasn’t been difficult or we haven’t had our struggles. But any new venture you’re always going to have those things.

The other day I was talking with Sam (Seasonal Roots’ Farmer Connector) about mindset and emotional things. You’ve got to turn a profit and make a living and support your family. But for us it wasn’t all about the money. It was about a lifestyle change and the direction we wanted to head.

How’d you pick up the hobby and then turn it into a second career? Do you come from a farming family?

We’re first-generation full-time farmers. My grandfather always did it on the side. But he never did it full-time. We were the first to do it as a career. Some new farmers do their research early and get started really young. But financially it can be really hard. Getting in when we did later in life, we had a monetary base we could fall back on because of the landscaping business.

Why did you get into all-natural farming? Was that your grandfather’s influence?

No, my grandfather’s methods were more conventional. We call our type farming unconventional because we’re out of the mainstream, unlike industrial farming. My wife was the driving force. Robin started the research to learn about healthy food and healthy eating, where we bought our foods from and how it was raised. She wanted our family to have healthier food. As we started doing it on the side for ourselves, we thought we might be able to make a go of this.

Healthier eating motivates a lot of us. What else motivated you?

Our faith — our belief that things are created a certain way, and they need to be allowed to perform in a manner in which they were created. Cows were created to be herbivores and eat grass, not meat byproducts and grain. Our society has changed that, wanting to get away from how something was designed to live, and that’s how we cause a lot of our problems. No animal was designed to live in an industrial situation, crammed in together.

So how did you learn how to farm unconventionally, as you call it?

Our learning has been schooling with folks who have been in our type of farming. We were reading Wendell Berry and Greg Judy. We’ve been to classes with Polyface Farms, falling back on their wisdom and experience. And of course trial and error — you learn by doing.

What’s been the biggest challenge of becoming an all-natural farmer?

That hardest part is that here in America, because of the industrial, commercial way that we do things, the food is so cheap. Our food is cheaper than anywhere else in the world. That’s hard to overcome. The food we grow is more expensive because our animals are so much more healthy and better for you. It’s more work and takes longer to grow a quality product.

But still, it has to turn a profit. So it’s been hard because that’s the biggest thing you hear: “Why is your meat so much more expensive?” We have to do a lot of educating. It’s better for you and tastes better. We do what we can to be transparent. We invite folks to come out and see how we do it. Our customers visit our farm and they can see our animals out on pasture or in the woods. With a local family farmer like us, you know where your food comes from. You’ve got no clue when you pick something up from one of the big box stores.

So what kind of response do you get?

Usually folks, if they want to eat healthier, once they get it, they’re sold for life. And those folks are everywhere. You’ve just got to be able to find them. That’s where Seasonal Roots fits in — you help us connect with those families who want to eat healthier food.

Grassfed is so much better. Because our herd is out on pasture, like nature intended, they stay healthier. They don’t get sick as often as they would crammed into a crowded, dirty feedlot eating grain. And their ruminant stomach can’t digest grain, so if you feed them grain, well then they need antibiotics. The meat we provide has no antibiotics and no GMOs.

Not only is the beef from Harmony Hill Farm grassfed — it’s grass finished, too. Many farmers who claim to be grassfed actually switch their cows to grain at the end to fatten them up faster. The cows of Harmony Hill eat grass their whole lives.

There’s more on that, plus the environmental benefits of grassfed on Harmony Hill Farm’s website.

Their site is full of great information, including their favorite books on these subjects, so be sure to check it out. You can also visit them on Facebook.

How to cook grassfed beef

To get the full benefit of lean, healthy, grassfed beef, you have to cook it right. Fortunately, it’s easy to cook right. You just have to know how. So don’t let anyone tell you grassfed beef is tougher than grainfed.

The biggest culprit is overcooking. Grassfed is made for rare to medium-rare cooking. If you prefer beef well-done, first sear it over high heat to seal in the juices, then cook it at very low temps in a sauce to add moisture, like in our beef bourguignon recipe. The reason: grassfed is high in protein and extremely low in fat.

However you like your beef, be sure to take it out of the fridge 30 minutes to an hour before you cook it, so it’s closer to room temperature. Like your muscles, it’s more relaxed (and tender) when it’s warmer. As it warms, it also releases moisture that you can pat dry ahead of time. That prevents the meat from steaming itself into a gray lump instead of searing nice and brown. Rub it with extra virgin olive oil, salt it, and if you like, coat it with your favorite dry rub seasoning.

For grassfed steaks cooked indoors:
1. Preheat your broiler to 450 and place a heavy, oven-proof skillet in the oven to preheat along with it.
2. When the skillet is sizzling hot, turn a burner on high, grab an oven mitt and move the hot skillet from the oven to the burner. Turn the fan over your stovetop on high and place the steaks in the skillet. They will smoke like crazy! But be strong and let them sear for a minute, then flip them to sear on the other side for another minute.
3. Put the skillet back in the oven. One-inch steaks will take 4-6 minutes to hit medium rare (120-130 degrees inside). Since it will continue to cook even after it’s removed from the heat, take it off when the internal temp is still 10 degrees below the target temperature. Using tongs (not a fork — don’t poke holes for the juices to escape), place the steaks on a cutting board and loosely tent them under foil for 10 minutes. This allows the juices to redistribute throughout the meat while it finishes cooking, making for juicier steak.

More tips for grassfed cooking, plus recipes, are on our Pinterest beef page.

Since 2011, Seasonal Roots’ online farmers market has connected Virginia families with local family farmers who use sustainable, humane practices. Our veggie fairies – mostly moms who believe in living better through scrumptious, healthy eating, being kind to animals, protecting the environment, and spreading joy – home-deliver freshly harvested produce, pastured eggs, grassfed dairy and meat, plus artisan fare. We empower our members to eat better and live better with more nutritious, flavorful food that’s good for us and good for the planet. More info at seasonalroots.com.