You are here: Home / Popeye 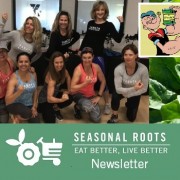 ...AND OTHER COOL SPINACH FACTS

Vintage cartoon fans can probably quote Popeye the Sailor Man’s famous line from memory: “I’m good to the finn-ich cause I eat my spinach!” A whole generation of kids grew up thinking they would be stronger if they ate spinach.

Find out more from Riley about spinach storage, history and benefit below, or view this issue as a printable PDF with clickable links. 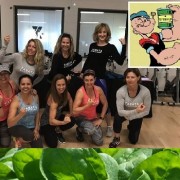 …and other cool spinach facts

Vintage cartoon fans can probably quote Popeye the Sailor Man’s famous line from memory: “I’m good to the finn-ich cause I eat my spinach!” A whole generation of kids grew up thinking they would be stronger if they ate spinach.

While that’s still true, it turns out the genesis of that popular notion actually began by mistake. A scientist misreported the number of grams of iron in spinach. According to thekitchn.com, in “1870 a German chemist, Erich von Wolf, correctly ascertained the amount of iron in spinach, but while transcribing his notes, he accidentally misplaced a decimal point: Instead of recording that spinach had 3.5 milligrams of iron per 100-gram serving (as is the case), he wrote that it had 35 milligrams.” That is a lot of iron!

In response to this, the creators of Popeye decided that this would be his superfood. The rest is history. Despite the error, it helped spinach gain popularity with parents and children alike.

In my opinion spinach is extremely versatile and I use it almost every day. Spinach is a great way to get your servings of greens in your diet. It’s easy to throw into smoothies or soup and easy to finely chop and add to spaghetti sauce and other foods.

Spinach is a nutritional powerhouse that is in the same family as beets, chard, and quinoa.

Spinach is rich in vitamins A, C, and K; minerals such as magnesium and calcium in addition to iron (obviously!); and antioxidant flavonoids and carotenoids. These good things are associated with boosting immunity, lowering blood pressure, fighting the causes of cancer, reducing inflammation, easing constipation and ulcers, and supporting good vision, healthier skin, and stronger bones. It may even improve your memory and slow down the aging of your brain! Watch this quick CBS News report about a recent scientific study on spinach brain power.

How to store and wash spinach

Surprising fact: Cooked spinach is better for you — with one exception

In most cases, cooking spinach actually increases its health benefits! (I’ll explain the exception in a moment.) Just half a cup of cooked spinach will give you three times as much nutrition as one cup of raw spinach. That’s because the body cannot completely break down the nutrients in raw spinach to make full use of all the goodness contained in the leaves.

Here’s the reason why: There’s a compound in spinach called oxalic acid, which blocks the absorption of calcium and iron. The problem is solved when you cook the spinach — the heat reduces oxalic acid’s power. But cook spinach lightly to preserve the nutrients while reducing the acid.

By the way, avoid cooking spinach in aluminum – some reports indicate it may ruin the spinach’s color and taste.

The exception to the “cooked is better for you” rule is when you pair raw spinach with a food that’s high in vitamin C. Vitamin C counteracts oxalic acid, too. Mandarin oranges and cantaloupes will do the trick, and combining them with fresh spinach leaves makes for a delicious salad.

There are so many ways to use spinach!

Cooked or raw, you can add spinach to almost anything.

DIRECTIONS:
1. Combine the milk, flour, onion powder, garlic powder, and lemon juice in a saucepan. Bring to a boil, then simmer for 5 to 7 minutes, stirring frequently, until the sauce thickens to a spreadable consistency. If using cow milk, use medium heat and watch closely to avoid burning the milk or boiling over.
2. Add the spinach and artichoke hearts. Mix well, then season with salt and pepper to taste. Cook for 2 minutes more, until the spinach has wilted. Add 1 to 2 T of water if the sauce gets too thick.
3. Let the dip cool completely.
4. Serve the dip warm or cold with the baguettes, tortilla chips, or pita chips.

This recipe and lots more are on the Seasonal Roots Pinterest spinach board.

Creasies are native plants that are much hardier than spinach, while still rich in iron and calcium with lots of vitamin A and C. Cooking tames creasy greens’ peppery arugula flavor, turning it mild like spinach. You can substitute it for spinach in any of our recipes. If you’ve never tried this native treasure, enjoy the thrill of discovery — that’s what eating local and seasonal is all about! Click here for a farm wife’s tutorial on creasy greens.