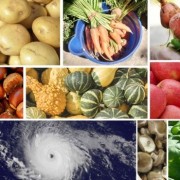 The Mystery of the Missing Green Beans

Green beans are a tradition on many a Thanksgiving table. So Sam, our Farmer Connector, always stocks our online farmers market with them for the holiday. This year, he scoured the whole region, but there was nary a green bean to be found. It was a mystery, but there’s a clue in that photo montage: One of these things is not like the other.

So: The culprit? The hurricanes! All that wind and rain took them out. Fortunately, our family farmers still have plenty of local, sustainably grown produce to make your favorite holiday sides: Yukon gold potatoes, carrots, beets, chestnuts, winter squashes, apples, mushrooms, spinach and more! Eating local is still delicious, even without the green beans.

If you just gotta have ’em though, you can always get green beans at the supermarket. But do it knowing you’re really just getting a pretty prop. Any green beans on the shelves right now have traveled a long way – guaranteed. In the process, they’ve lost most of their nutrients and flavor, and burned a big carbon footprint.

Eating locally means eating what nature provides while enjoying fresh delicious flavor, great nutrition, and a cleaner environment. All good things to be thankful for. Happy Turkey Day, everybody! 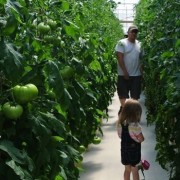 Thanksgiving is coming, right about the time most traditional farmers markets are closing for the winter, or scaling back. But not your year-round online farmers market! We stay open all through the winter because a little dip in the temperature gauge can’t stop our local farmers from farming.

So what’s happening on the farm?

Family farmers are still out in their fields gleaning the last of the summer and fall crops like peppers and eggplant. They’re tending to cold weather crops like beets, carrots, parsnips, and greens.

They’re putting their greenhouses to work to grow more tender produce like tomatoes and basil. Check out that photo if you need proof of the power of a greenhouse — inside one of the greenhouses on Sion House Farm in eastern Virginia, the McKenney family extends the season growing crops like local tomatoes… and for wearing shorts!

Our farmers who raise animals are busy, too. Their cows are still producing milk and their chickens are still laying eggs.

What’s up with those lighter-colored egg yolks?

Lately you may have noticed that the yolks are little more light-colored than usual. Your eggs are still as fresh as ever, and the hens are still pasture-raised. So what’s going on?

The folks at Avery’s Branch Farms explain: “At this time of year the grass quantity starts to be depleted and we start feeding them alfalfa hay. It takes a couple weeks for them to get adjusted to the hay and that causes a few lighter weeks.”

So there’s still a lot going on out on the farms. And that’s why we stay open year-round – to support our local farm families and to help you keep eating fresh nutritious local food throughout the year. 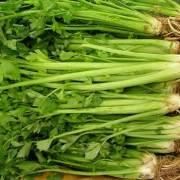 It’s celery season out on the Flores family’s farm on Virginia’s Northern Neck. Gerardo and his son Omar are harvesting fresh, aromatic celery bunches from their fields. Then our veggie fairies deliver it straight to you within just a couple days.

If you ever needed proof that freshly harvested local produce tastes better than the stuff you get at the grocery story (which is at least a week old), do a celery taste test.

Until I discovered fresh local food, I thought celery was supposed to taste like grocery store celery – bitter or, at best, blah – useful as a crunchy delivery vehicle for peanut butter, various cheeses, or hummus, but otherwise best hidden in soups, stews, or salads.

Compared to that, the first time I bit into freshly harvested celery, the taste was a revelation. It was loaded with so much zingy flavor that I ate it all by itself as a snack. When I roasted it, that peppery flavor turned sweet. And when I made cream of celery soup with it, as much as I love any kind of grass-fed creaminess, I had to admit the celery was the star of the show.

Lots of flavor, lots of nutrients

If produce is full of flavor, that’s a good indicator that it’s full of nutrients as well. Flavor and nutrients go hand in hand – the longer produce sits around after it’s been harvested, the more they both fade away. Check out how much nutritional value is lost during the week (or more!) that it takes most produce to get from the farm to the grocery store.

So when produce is bursting with flavor, it’s usually bursting with nutrients, too. In the case of celery, that includes B vitamins, and vitamins A, C, and K, plus potassium, calcium, folate, and fiber.

Why does fresh local celery taste so different?

I’ve already mentioned one of the biggest reasons: the amount of time between when it’s picked and when you eat it. Grocery stores just can’t compete with local produce that’s home-delivered within a couple days of harvest, the way Seasonal Roots’ produce is. Even grocery stores that carry local food can’t offer it to you until after it makes its way through the delivery and warehousing system… which all takes time.

But there are other reasons why our local produce tastes better and is better for you. It starts with the dirt. Our local family farmers use sustainable practices to keep their soil nutrient-rich so the produce they grow in that soil can then absorb those nutrients.

Next, because our produce doesn’t have to sit in a warehouse, our farmers can pick it at the peak of ripeness, after it has soaked up all the flavor and nutrients that it can get from Mother Nature. Produce that’s picked early for a long trip may turn the right color along the way, but it doesn’t gain any nutrients or flavor in the process.

Also, during our more direct delivery process, our local produce gets handled less. So it’s less likely to get bruised, cut, or damaged. Damage speeds up the natural deterioration that makes flavor and nutrition go bye-bye.

Gerardo and Omar’s celery comes fresh from their fields with the flavor, nutrients, and roots still attached. Eat it raw or use it to cook up something amazing! We’ve got lots of healthy, tasty celery ideas on our Pinterest celery board.