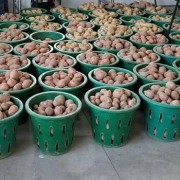 Fresh potatoes like the ones grown by the McKenney family at Sion House Farm in Farnham, Va., above, may look like pretty dull company. But beneath every potato’s mild-mannered exterior lies a super-tasty, super-nutritional SuperSpud! Or they are when you eat them fresh, like these, not processed into store-bought French fries, chips, tater tots, or hashbrowns.

Prior to the 1960s, Americans ate most of their potatoes fresh. But as freezing technology improved, processed potatoes became more popular. Today, the USDA says processed ‘taters eat up 64 percent of the potatoes we consume! Compare that to just 35 percent in the ’60s. Americans, on average, eat 55 pounds of frozen potatoes per year, 42 pounds of fresh potatoes, 17 pounds of potato chips, and 14 pounds of dehydrated potato products — whatever the heck that is.

That’s a lot of potatoes. No wonder potatoes are the #1 vegetable crop in the United States and the fourth most-consumed crop in the world. According to the bean counters at the U.S. Department of Agriculture, they’re beaten only by rice, wheat, and corn.

Anyway, potatoes are often thought of as a comfort food — mashed with rich butter and sour cream or fried up crisp in vegetable oil. But when you prepare them like that, they can lead to weight gain, diabetes, and heart disease, according to the Harvard School of Public Health. Of course, grassfed butter is a different matter, because grassfed results in healthy fats.

In fact, a study published in 2017 in The American Journal of Clinical Nutrition found that people who ate fried potatoes twice a week wound up with an increased risk of death. Yikes!

But happily, the study did not find any correlation between non-fried potato consumption and increased death. This backs up University of Texas nutritionist Victoria Jarzabkowski, who argues that potatoes aren’t necessarily bad for you.

The healthiest way to cook potatoes

The next-healthiest way to cook a potato is to steam it. The worst thing you can do is boil it, because if it’s cut up or peeled, all the water-soluble nutrients leach out into the water. That includes B-complex vitamins, vitamin C, potassium, and calcium. As much as 80 percent of a potato’s vitamin C goes down the drain if you boil it.

The same thing can happen when peeled or cut-up raw potatoes are left to soak to keep them from darkening. Exposing any cut up veggie to air is no better — air, light, and heat are the enemies of nutrients. Best to do all the prep right before you cook whenever possible.

So when you cook potatoes the right way, without heaps of butter, cheese, or cream (unless all that dairy’s grassfed, because grass produces healthy fats), they really can be good for you. Just check out these amazing potato nutrition facts.

Amazing Fact #1: The skin is the best part

Don’t peel that potato! However you cook it, try to eat the skin. Ounce for ounce, the skin contains more nutrients — including the majority of the spud’s fiber — than the rest of the potato! Speaking of skin…

According to Organic Facts, vitamin C, vitamin B6, potassium, magnesium, zinc, and phosphorous can all help keep skin as smooth and creamy as, well, mashed potatoes. These nutrients are all present in potatoes, mashed or not.

Lo-cal, as in low calorie. Potatoes weigh in at just 110 calories for a medium-sized baked potato. And they’ve got zero fat calories. So a spud’s calorie count is not going to add to your waistline. By the way, in addition to being fat-free, potatoes are also cholesterol-free.

While a potato’s low calorie count won’t make you loosen your belt, they are starchy carbohydrates with very little protein. And those carbs are the kind that the body digests rapidly. They’ve got what’s called a high glycemic index value. Potato carbs cause blood sugar and insulin to surge and then dip, so you may wind up feeling hungry again soon after eating. That can lead to overeating. Plus the rapid rise in blood sugar can also lead to increased insulin production — not a good thing if you’re diabetic.

On the other hand, potatoes are also a great source of fiber, and the fiber content helps you feel fuller longer.

Meanwhile… a 2016 study in The American Journal of Clinical Nutrition found that different people respond to a food’s glycemic index value in different ways. So this study suggests that the glycemic index is only somewhat useful when it comes to making food choices.

Bottom line: Whether or not you should avoid potatoes depends on how your individual body reacts to them. There’s no one-size-fits-all.

Some people think potatoes and other members of the nightshade family — such as eggplants, tomatoes and peppers — trigger arthritis flares. However, the Arthritis Foundation says there is limited scientific evidence to support this hypothesis. They suggest that arthritis sufferers try cutting nightshade vegetables from their diets for two weeks to see if symptoms improve.

Some studies indicate these vegetables may actually help reduce arthritis symptoms, the foundation said. For example, a 2011 study published in the Journal of Nutrition found that potatoes might actually reduce inflammation.

Again, figure out what works best for you.

A 2017 study published by the Journal of Nutritional Biochemistry found that consuming purple potatoes might reduce the risk of colon cancer. Purple potatoes are high in antioxidants and anti-inflammatory properties that can reduce levels of a protein linked to cancer cell growth in the colon.

Amazing Fact #7: Potatoes have as much vitamin C as half an orange

Spuds are the new citrus! Vitamin C is a powerful antioxidant, and antioxidants ward off damaging free radicals that destroy healthy cells throughout your body.

Vitamin C also keeps your immune system strong, helps wounds heal properly, and aids in the absorption of a certain type of iron. Because of vitamin C’s many roles throughout your system, keeping up with your daily intake is important. Potatoes can get you there.

According to Jarzabkowski, the nutritionist, there may be several reasons for this. All that fiber may help lower cholesterol by binding with cholesterol in the blood. “After it binds, we excrete it,” she says.

Potatoes are also a good source of potassium, even more than a banana. A lot of it is in the potato’s skin, which also contains a good deal of fiber. Potassium is a mineral that helps lower blood pressure, according to the U.S. Food and Drug Administration, by widening blood vessels.

Plus, scientists at the Institute for Food Research have discovered that potatoes contain chemicals called kukoamines, which are also associated with lowering blood pressure.

Potatoes’ high level of carbohydrates may have some advantages, like maintaining good levels of glucose in the blood. You need that for your brain to function properly. A 1995 study published in the American Journal of Clinical Nutrition found that modest increases in glucose could help enhance learning and memory. Potassium, by encouraging wider blood vessels, also helps ensure your brain gets enough blood.

Also, the B6 vitamins in potatoes are critical to maintaining neurological health. Vitamin B6 helps create useful brain chemicals, including serotonin, dopamine, and norepinephrine, according to the University of Maryland Medical Center. This means that eating potatoes may help with depression, stress, and maybe even attention deficit hyperactivity disorder (ADHD).

Amazing Fact #10: Potatoes go down easy and come out the same way

Potatoes aid digestion, big time, due to their high fiber content, Jarzabkowski said. Their high level of carbohydrates also makes them easy to digest, while their fiber-filled skin can help keep you regular.

Amazing Fact #11: Potatoes are a win for athletes

And last but not least…

Still, poison is also found in green potatoes. They turn green if they’re exposed to light too much. NIH says you should “never eat potatoes that are spoiled or green below the skin.”

What about a potato’s “eyes”? Are they poisonous? The “eyes” of potatoes are buds, which will sprout into branches if left alone. If they’re not sprouting, they’re totally edible. If they are sprouting, NIH recommends cutting off the eyes and the sprouts. Once that’s done, you can chow down on the rest of that ‘tater.

To get more details on the science and history of potatoes, read the original article.