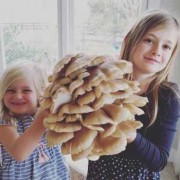 Plus surprising new things they’re making out of mushrooms!

In American culture, there’s a stigma attached to mushrooms. They are, after all, a fungus. They’re funny looking. They have a reputation for growing in manure, which isn’t exactly appetizing. And when it comes to wild mushrooms, most parents tell their kids, “Don’t touch them, you’ll die!”

That may be why, until relatively recently, most mainstream grocery stores just carried those bland, clean-looking white button mushrooms. There are so many mushroom varieties — portabello, shitake, enoki, morel, and on and on… but it takes a certain sense of adventure to move beyond those white buttons to a mushroom that looks like, say, an oyster.

It’s an adventure that rewards you with an amazing array of flavors, nutrients, and a surprisingly long list of health benefits. But wait! There’s more! Creative engineers are using mushrooms to make animal-free leather, and Ikea is starting to use mushroom-based biodegradable packaging for its furniture.

Turns out mushrooms are pretty magical, which is right up our fairy alley. So we turned to our Seasonal Roots mushroom farmer to find out more. Mike M’s oyster mushrooms come to us through Schuyler Greens, the company his brother founded for growing greens, herbs, microgreens, and specialty crops.

Mike definitely has a sense of adventure. He’s been foraging in the woods for years around his family farm, Magnolia Farm in Esmont, Va. To him, the woods are a world of wonder. Hunting for wild treats like pawpaws, a native fruit that shyly hides among the leaves, was like a treasure hunt.

One day he came across a cluster of wild oyster mushrooms on a dead tree, like the ones his daughters are holding in the photo.

Mike was fascinated, started reading about them, and discovered they have all kinds of health benefits. He told us that because of the mushroom stigma, scientists didn’t study them much until recently. Now we’re learning lots of new things about mushrooms. Modern-day scientists are rediscovering what the ancients knew from living close to nature. For example, there are elements in mushrooms that may help inhibit the growth of cancer cells. (Read the study here.)

Oyster mushrooms in particular are used in traditional medicine to treat infections, diabetes, cancer, and to lower cholesterol. They support the immune system. Laboratory experiments and studies done in mice have shown that oyster mushrooms do indeed have antitumor, antifungal, and cholesterol-lowering properties. A study of children with upper respiratory tract infections showed that oyster mushrooms have anti-allergic effects, too. They have even been shown to lower glucose levels and increase insulin levels in patients with type 2 diabetes, though more studies are needed to confirm that. The Memorial Sloan Kettering Cancer Center has details on oyster mushroom health benefits here.

Why are mushrooms so good for us?

Well, one reason is that they don’t have skin to protect them from bacteria. Their cell walls are their exterior, so they’re programmed to fight off bacteria. We get some of that anti-bacterial benefit when we eat them. Scientists and engineers are also using the mycelium — the vegetative tissue of mushrooms — as a filter in water treatment to make contaminated water drinkable. Mushrooms are so adaptable and they grow exponentially. Because of that you can train them to do things like break down diesel fuel and other petrochemicals to treat contaminated soils in a process called mycoremediation.

The oyster mushrooms you sell for eating — do you gather them from the wild or do you grow them yourself?

We grow them. We started doing it for fun. We have cattle, sheep, and so on, but we’ve got two little daughters and growing mushrooms is something we can do as a family. It’s not dangerous like working with animals or equipment can be. And mushrooms are fascinating. I’ve got the kids doing all this really great science with mushrooms. We have petri dishes with all these different strains growing in our bedroom — my wife is very patient. Anyway, it’s turned into a family thing.

Okay, so be honest. Do they really grow in, um, manure?

Some do. But oyster mushrooms grow on cellulose, like wood or straw. That’s why out in the woods you find them on logs or dead trees. They help break down the wood as it decomposes. But we grow them indoors where we can control the elements. For example, a change in temperature will change the color a little. The cellulose in straw grows excellent mushrooms but straw has a lot of variability when you pack a big bag. It’s hard to be consistent and predict what you’re going to produce and that makes it hard to fill orders. So we’re trying sawdust now, which is more uniform. Everything’s an experiment. Each tweak you make changes the yields.

So what do you do — like, plant seeds in the straw?

Sort of. The mushroom equivalent of seeds is called “spawn.” You mix the spawn in with the sawdust and incubate it in the bag at a certain temperature. It takes a few weeks to colonize the substrate. Shitake mushrooms trigger with water. With oyster mushrooms, you cut a hole in the bag and the surge of oxygen tells the mycelium that it’s time to fruit. In the woods, the mycelium grows inside the log. When it reaches the outer edges it runs out of food and hits oxygen. Then when humidity and rain come that’s when the fruiting happens. That’s the magic of the woods. Every time it rains there’s something new and exciting to find.

So the next time you go for a walk in the woods, keep your eyes peeled — you’ll probably spot some fabulous fungi. But — at the risk of sounding like your mother — unless you are an experienced mycologist like Mike, do not eat any of the mushrooms you find growing wild! Many poisonous species look very similar to the edible ones. Best bet is to place an order for Mike’s magically delicious, nutritious, farm-grown beauties, then sit back and enjoy all those mushroom health benefits with yummy peace of mind.

This is how fair trade coffee helps the Chesapeake Bay