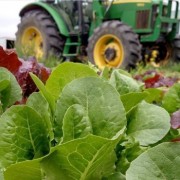 Local produce has one big advantage over supermarket produce

– By the Veggie Fairy Team:

Local produce tastes better than supermarket produce, and there are three reasons why. For local farmers like the Flores family in Hauge, Va., those three reasons add up to one huge advantage when it comes to flavor:

1. Local produce travels a short distance in a short amount of time — within 150 miles of where we deliver, going from Dirt to Doorstep® within just a couple days.

2. On its way to you, our local produce passes through just a few hands — the hands of our farmers and our veggie fairies. We all handle it gently to avoid damaging it.

3. So because local produce doesn’t have to travel far, and is handled gently, it gets picked when it’s supposed to be picked: at the peak of ripeness. That’s when it has absorbed its full portion of flavor (and nutrients) from the sun and the earth.

So being local is a huge advantage. We talked about that with Omar Flores, whose father Gerardo started the family farm.

Supermarkets are selling a lie

But before we get to the Q&A, compare local produce like the Flores’s to supermarket produce:

1. Most supermarket produce travels long distances over long periods of time. It comes from across the country and overseas, sometimes halfway around the world. It’s usually at least a week old by the time it arrives in the supermarket.

2. It has to withstand rough handling as it passes through middlemen and warehouses and factory-like assembly lines. Supermarket produce has to be bred to be tough enough to prevent damage. It’s not bred for maximum flavor.

3. Because it has to travel so far and long, it has to be picked before it’s ripe. Otherwise it would rot before it gets to you. It either ripens indoors along the way or gets gassed at the last minute to make it look ripe in the supermarket. Either way, it doesn’t get to absorb its full portion of flavor and nutrients from the sun and the earth, so it isn’t ripe in the true sense.

Supermarkets are selling you a lie.

Local farmers are selling the truth

Local family farmers like the Floreses, on the other hand, are selling you the truth. Produce that is truly ripe, truly nutrient-rich, and bursting with true flavor. We asked Omar Flores how they do it.

Your family provides our members with a jaw-dropping array of vegetables and fruits, a lot of them really unique. This week alone you’ll be bringing us multiple varieties of potatoes, cucumbers, beets, garlic, basil, and kale, plus cabbage, radishes, red sweet onions, Swiss chard, fennel, curly parsley, collards, and hyssop — what the heck is hyssop?

It’s a mint-like herb that’s been used since ancient times. It’s even mentioned in the Bible.

That’s why it sounds familiar! You also provide us with greens, beans, carrots, squashes, tomatoes, and more pepper varieties than we can count, many of them inspired by your family’s Mexican heritage.

My father, Gerardo, he always tries to grow anything that’s different, so his produce stands out.

And it does — your family’s farm is like an adventure in veggies. Do you grow it all yourselves?

We do grow all our own stuff. We’re not a big commercial farm — we’re just my dad and my mom, my two little brothers and little sister, and me. It’s a lot of work. When my dad was growing up in Mexico, he helped his father grow corn. After he emigrated to the U.S., he worked in apple and peach orchards and other farms. Eventually he started growing his own vegetables. So he has the knowledge and experience to do most of the farming, and the rest of us help him. I help with planting and delivery and farmers markets.

Omar has been helping his father Gerardo since he was a kid.

What kind of farming techniques do you rely on?

We’re sustainable. We use water conservation methods and although we’re not certified organic, we use the same chemicals as organic growers. We don’t do the big mono-crop type of farming like the big corporate farming operations do. We start our own plants from seed in our greenhouse, and transplant them into the fields. We grow a big variety of produce on our land, side by side with open fields of wild flowers, so we’ve got a pretty healthy ecosystem. We live right there on the farm, and my wife and I have two toddlers, so we want it to be healthy and safe for all of us.

And how often do you do planting? Just in the spring?

Oh no, we’re planting something new every week throughout the growing season. And every week something else that we planted earlier is reaching maturity, ripe and ready for harvest. Like for instance, we plant tomatoes four times a year, and cucumbers every three weeks. Because we’re constantly planting, that’s why our produce has so much flavor. We only pick it when it’s naturally ripe, and that’s happening every week. There’s always something turning ripe, full of flavor and ready to eat.

How big is your farm?

We now own 40 acres of fields and open land, and we lease another 18 acres. The first year, though, we didn’t even have a tractor. We did everything by hand. The next year, we bought a tractor. And year by year we’ve been buying the equipment we need to expand, mostly used equipment. Thanks to the families who support us by buying our produce, we were able to put in a small irrigation system. But most of our fields are watered by Mother Nature, whenever she decides to make it rain.

And this spring she was a little too generous with the rain!

Yeah, it affected the peppers and squash, but we just replanted and kept going. That’s farming. You work without knowing how it will turn out. It’s a gamble every year. If you think about it, we’ve been working since February for free, when we first started planting. We don’t get paid until we have something to sell. So we really appreciate your members. We couldn’t farm without them. That’s really my favorite part of farming — knowing we are feeding people and making them happy with food that tastes better than anything they can buy at the supermarket.
*
For more photos of Flores Farm on Virginia’s Northern Neck, visit the family on Facebook.