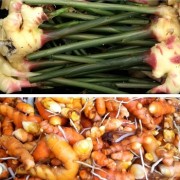 They’re good for your health and this local family farm

Ginger and turmeric are both ancient spices known for fighting inflammation and boosting your immune system. Ginger is also an old-time remedy for nausea. Best of all, they do it all with amazing flavor — from ginger’s spicy sweetness with lemon undertones, to turmeric’s gentle notes of lemony mint.

The ginger puree and turmeric puree in our home-delivered farmers market is great in smoothies! And it’s grown by Wendy and Richard on the Farm at Red Hill outside Charlottesville, Va. The husband-and-wife team make a variety of artisan foods to jazz up any meal, and it’s all fresh, with no preservatives, no added sugar, and gluten free.

According to Wendy, they got their start making local artisan food thanks to a bumper crop of tomatoes.

Have you always been farmers?

Nope, electrical contractors! But 12 years ago when our two kids were little we were looking for something that would be more conducive to family life. We had five acres, and luckily Richard is very handy and an electrician. We bought all our equipment at auction or on eBay, built four greenhouses, and started growing all sorts of vegetables.

I’m not a farmer and neither is Richard, but we’ve learned so much — we literally knew nothing. We’ve learned that the number of mistakes you can make is just incredible! We also learned that if you show up good things happen. We started selling what we were growing in the Charlottesvile farmers market. And we had great success! Until the middle of summer when everyone and their grandmother is growing tomatoes. We wound up feeding a lot of ours to our chickens. They were happy but we weren’t making any money.

Oh no! How’d you stay in business?

Well, Richard started making salsa and gazpacho. We were growing sorrel, too, which is a lemon flavored herb, and a friend bought it to make hummus instead of using lemon juice. That inspired us to start making hummus. One thing led to another. We started making jam because our whole farm is a no-spray zone. We didn’t want to send the kids out to pick things for dinner and then have to warn them to put on gloves just to go in the greenhouse or the orchard. But no-spray means we have delicious but ugly peaches that no one would buy. So we made jam. That was really popular. Pretty soon, the artisan foods we were making got to be more popular than the fruits and vegetables we were growing.

The English Cucumbers were the reason for our tzatziki and gazpacho. The ginger and turmeric are our newest crops and they inspired us to do the fresh grated vacuum packed items along with the jam. The trick was learning how to make everything in a way that it would have a long enough life without using preservatives, since we’re all-natural.

What do you use instead of preservatives?

Shutting out the air by vacuum packing is one way. Also, lemon is a natural preservative. Of course that makes things sour, so to counteract that in the salsa we add carrots, which are naturally sweet. We don’t add sugar to anything. You look at salsas in the grocery store and even a lot of the all-natural ones still put sugar in there. Even if they call it stevia or agave, it’s still a form of sugar.

Do you still make it all yourselves?

We’ve grown so much we’re able to employ other people, too, to help us make and distribute everything. We’re providing jobs for eight people right here in our community.

So did farming turn out to be good for your family life?

Oh, the kids were mortified when we started out. They didn’t want to be farmers! But now, twelve years later, they like to say their parents have a farm. Now it’s a status thing. But it’s more than that. When our daughter was applying to colleges, for her essay she wrote, “What does a teenage girl and a rooster have in common? The answer is absolutely nothing.” She wrote about how she was tortured and mortified to be the child of a farmer. But in the end, she wrote, “I can’t believe that ten years later, I can now see that when life gives you tomatoes, you can make salsa!”

Check out Wendy and Richard’s ginger puree, turmeric puree, jam, hummus, tzatziki, and more in the Extras section of our home-delivered farmers market. You can also visit the Farm at Red Hill on Facebook.

Since 2011, Seasonal Roots’ online farmers market has connected Virginia families with local family farmers who use sustainable, humane practices. Our veggie fairies – mostly moms who believe in living better through scrumptious, healthy eating, being kind to animals, protecting the environment, and spreading joy – home-deliver freshly harvested produce, pasture-raised dairy, eggs, and meat, plus wholesome artisan fare. We empower our members to eat better and live better with more nutritious, flavorful food that’s good for us and good for the planet. More info at seasonalroots.com.

INTRODUCING THE FARM AT RED HILL
Scroll to top